As a social scientist working together with engineers and computer scientists I am often asked: Why does this humanist stuff matter? The answer is, because in my opinion it is the only way to realize technology that matters together with users and for users. Robots fetching objects and living lab installations are relevant scientific steps towards developing robust technology. However, too many field trials have already revealed the problem with ignoring the importance of Human-Computer Interaction: Technology does not get adopted and is rejected on the long run. Indentifiying the relevant context parameters that may impact sustainable technology adoption is often already a methodological challenge in itself for social scientists. Similarly, facing the contextual constraints presented by these unstructured environments is challenging for the developers. However, the biggest common challenge in all these areas are the people using the technology. Thus, it needs interdisciplinary approaches to develop intelligent systems, which have a chance of surviving in the real world and not only in our publications and laboratories. 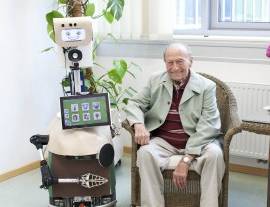 In this project, we developed a robot that should enable independent livelong of older... 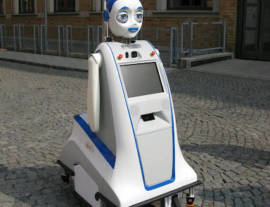 In this project, we developed a robot following a user-centred and human-translated...

Copyright Astrid Weiss © 2020. All rights reserved. Imprint
We use cookies to ensure that we give you the best experience on our website. If you continue to use this site we will assume that you are happy with it.Ok